In contrast to decimal notation, the base ten notation is a very convenient way to express, both, large and small numbers, and frequently used in engineering, math and science.

Here you can learn everything about writing numbers in scientific, normalized and e-notation, including the definition and rules for mathematical operations.

Keep reading to understand all about it, and make sure to check out our converter further below in this article.

What is Scientific Notation?

The coefficient m is called significand; m can be any real number, and n is an integer.

The term m × 10n is pronounced m times ten to the power of n, an exponentiation with the base 10 and the exponent n, as detailed in the second reference at the bottom of this page.

In the next section we look at the definition of scientific notation and introduce the normalized notation.

Scientific notation is a method of expressing real numbers in terms of a significand, multiplied by a power of 10.

Normalized scientific notation is a method of expressing real numbers in terms of a significand m, multiplied by a power of 10, such that 1 ≤ |m| < 10.

On this site we discuss the normalized representation, unless stated differently.

Next, we are going to show you how to convert decimal numbers.

To convert a number to scientific notation move the decimal separator point n places, to put the number’s coefficient within a desired range, between 1 and 10 for normalized notation.

You can have it way easier by using our converter below. Our tool converts your number back and forth, on the fly.

Note that the numbers are shown in ^-notation which means that ^ replaces superscript; the rest is self-explanatory.

More about e-notation can be found further down on this page.

Observe that no button must be pressed unless you want to change from a decimal to standard index form transformation to a scientific to decimal conversion.

Frequently converted numbers on our site, among many others, include:

In the next part of our article we are going to discuss the rules for the arithmetic operations multiplication, division, addition as well as subtraction.

Once the coefficients have been multiplied or divided, the multiplications and divisions of the indices are conducted according to rules detailed in exponentiation.

With respect to the sum and difference, follow the instructions and check out the example conversions, once in abstract form and once with a real example.

Also bear in mind that you could always convert the numbers to decimal format, do the math, and then convert the result back to scientific or exponential form.

For the multiplication, build the product of the significands, then add the exponents.

To achieve normalization, you may have to move the decimal point such that 1 ≤ significand < 10:

For the division, build the quotient of the significands, then add the exponents.

For the purpose of normalization, you may have to move the decimal point such that 1 ≤ coefficient < 10:

For the addition all numbers must be converted to the same power of 10 before the coefficients are added.

For the sake of the normalized form, the decimal separator may needs to be shifted for 1 ≤ coefficient < 10:

For the subtraction all numbers must be converted to the same exponent of 10 before the significands are subtracted. For the sake of the normalized form, the decimal point may needs to be shifted for 1 ≤ significand < 10:

To convert a number from scientific to decimal notation, first take notice of the value of the exponent n, then remove the appendix.

As you can see, the procedure is the same for both, negative as well as positive numbers. What matters is the absolute value of the index.

Ahead is our explanation of the e-notation.

E-notation is the way many calculators display the normalized scientific notation.

Instead of m × 10n, they display a number as me±n, thereby avoiding the use of superscript or the caret symbol.

In contrast to exponential notation, in e-notation the absolute value of the significand m is always in the interval [1;10[.

In the context of our article, the frequently asked question include, for example:

Taking into account all of the above, you already know the answers. However, if something remains unclear just fill in the comment form or send us your issue or question by email.

Next you can find more examples of standard index notations, which can also be used as practice, followed by a table and the summary of this page.

For your convenience, we have also stated the example numbers in e-notation.

Last, but not least, here’s our table containing common values:

You have reached the end of our article which we sum up using the following image: 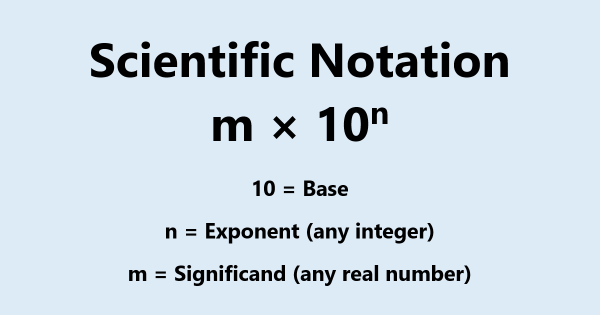 Writing numbers this way, using a coefficient multiplied by a power of 10, is very convenient to express very small numbers and very large numbers.

Note that instead of our converter, you may also use the search form in the sidebar, or at the bottom, depending on your device, because we have already converted many numbers for you.

If something remains unclear, then you can check out our FAQs.

If you are happy with our content, then hit the sharing buttons to let all your friends know about our site, and don’t forget to bookmark us.

Thanks for your visit.